Why I am Selling My Duplex — Achieving Millennial 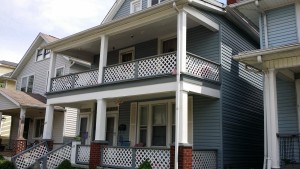 A picture of the front of my duplex.

am moving on from real estate as an endeavor.  I only bought the property — only as an investment, never to inhabit — a year ago, but I’m planning on cashing out and moving on to my next venture.

I’m a person who can think of a bamillion different business opportunities if you give me enough time and enough caffeine.  Real estate offers a lower barrier of entry because you can very easily utilize OPM (other people’s money) while you build your portfolio.  During the fall of 2013 I started heavily researching investments, including owning rental property.  During the winter of 2014 I gained preapproval and started looking at duplexes as my initial real estate investment.

The duplex seemed almost, too, perfect for a first-time investor: two long-term tenants, a solid building, and in a neighborhood whose value should increase in the upcoming years.  During my close, it felt like something was off.

I had no real evidence, but my intuition said something was off during the close.  I had a feeling something was fishy with one of the tenants.  The closing date kept getting pushed back (although that was more of a scheduling thing with the plethora of people involved), which might have been telling me something.  And even halfway through my closing my mortgage broker told me that my mortgage would be reclassified, thus tremendously increasing the due-at-closing costs — something else that might have been a sign.  As well as when I took over it went from “the tenants take care of a lot of stuff” to “when are you going to do this?”; it seemed like there was a “miscommunication” or two.

I don’t like to micromanage, anything (okay, I like micromanaging my hobbies, but they are my hobbies, not something I have to do).  My, inexperienced, managerial opinion is that if I have to actively manage you, I messed up by hiring you in the first place.  With this duplex, I inherited the tenants.  I soon learned that they don’t take care of nearly as many things as I was told — yeah, they actually don’t mow the yard — oops!; instead the neighbor did it, and once had the effrontery to tell me he wasn’t charging me for something he installed — even though his only job was the lawn.  Little things like that really brought down the real estate experience for me.  I really don’t like having to deal with minute details when I know I can be doing bigger and better things.

I had envisioned that the duplex “community” would be on autopilot and I could set out my efforts on what I could do next.  Hey, I’m future-focused to a fault and why stop with one duplex?  You’re not making much money on it, even if it’s free-and-clear (and I never thought that I’d be in real estate passively, I wanted to make it into a booming business).  I set my mind to deciding if I want to do a rehab or another rental next.  That is, until I had to evict a tenant (the shady one that I had a bad feeling about).  Long story short, I had to file several motions, go to court, all the while never receiving that second rent.

I talked about selling in the summer with my realtor.  He talked me out of it because it is an investment after all, and he suggested property management as a way to be in the game, with doing next to nothing on my end.  He sold me on that idea.  Unfortunately, it took a long time to get a second tenant, so I had only one tenant and a property management firm to pay as well (not too much, but this wasn’t exactly a property with positive cash flow).

In the fall I started to think of new business ideas.  Well, more like one just kind of came to me and I started to think more into it.  Eventually, I came to the conclusion that I would need to self-finance it myself to get it off the ground in order to have a functioning company; the plan is with a working model I can show investors and they’ll throw money at it.  I’ll let you know how that goes.

Being the entrepreneur that I am, and one who thinks about life as trial-and-error I decided to throw in the towel for my duplex.  Although I am in positive cash flow right now, that’s only a few grand extra per year.  That’s a hit-by-pitch compared with other ventures I can start.  I always viewed my first property as a learning experienced.  It’s to be determined how much it’ll end up costing me, but it’s a lot more than a degree of some sort in real estate, but with actual real-world experience.  I’ve learned more in the last year about real estate than I ever would only from research and education alone.

As I mentioned, I plan on using the money from my duplex to start my high-tech company.  Perhaps it will blow up, perhaps it’ll serve as a nice job, or perhaps it’ll only serve a footnote in my life.  At the end of the day I’d rather try something and it not work – but try something to see if it would – than wondering “what if”.  I don’t want to live “what if”.  I don’t want to be that old, jaded guy who wonders what would have happened if he threw his name in the ring decades earlier.  Not me.