Why do we networking?  Ostensibly because we don’t know everyone we should know (otherwise it’d be called happy hour or coffee with friends — which, thinking of that, may not be a bad idea of rebranding “networking”).  Here is my list of the Top 5 reasons I believe you should start networking today! 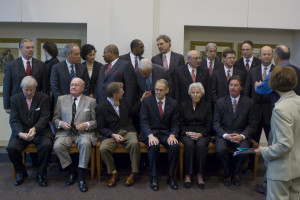 Network well and you may, yourself, be on a major university board!

Let me get the Captain Obvious portion out of the way.  The mission statement of networking stems from meeting new people.  But it’s not always meeting your interlocutor.  I met my latest mortgage broker from someone I met from a networking event.  People who attend networking events want to help you out as much as they want you to help them out (you scratch my back and I’ll reciprocate sort of thing).

I’m a recovering night owl (during my family vacation I’m the illusive night owl and morning bird).  However, I find that getting up early and doing something productive makes me more ambitious.  I’m very extroverted by nature, so getting hopped up on coffee and meeting new people raised my energy levels that carry over for the rest of the day (assuming I don’t create any lulls throughout the day).

Learn Interesting Things About Others

People are interesting.  Everyone has their own story to tell.  Asking what they do outside of work may be the reason you remember them from the rest of the accountants, financial advisers, or realtors you meet at these networking events.  How about the person who not consults start-ups, but who has a graduate biology degree, MBA, Series 6 license, realtor’s license, etc., etc.?  (I’m not joking the dude’s a 21st-Century polymath.)

Learn About Other Events

This is what happens when you start to go to networking events, they tell you about others way you can meet people, for personal or business reasons.  Hopefully you don’t think that networking is a one and done thing (if you live in a big city, you can probably find, literally, a way to fit your entire waking schedule with networking events).  Even if you see the same people a few times you’ll start to build a relationship with them.  But since you’re already a go-getter about getting up at 6 to meet strangers, you’ll learn how you can do it again, tomorrow, at a bar!

To Learn About New Ideas and Opportunities

Perhaps you’re a visionary but broke your glasses.  Hearing what else is out there can lead to your eureka moment, which will help your idea really take off.  You don’t have to create the light bulb, but make it better.  (Google and Apple sure weren’t creating the wheels.)  Or what about an awesome runner’s club, yoga center, or gastro pub bar?  I go into networking events knowing that I’ll learn about random happenings in my greater locale.

Plus one: If You Don’t Have a Network, Create one!

I started networking at Columbus Young Professionals because I had a very, very small network.  I know of a few people who may know people in Columbus, but definitely not enough to really say I have a guy for this or that.  It’s ackward the first few times you go somewhere that you don’t know anyone, but after attending a few events you see familiar faces.  From that, I met someone who started a different networking group.  So, now I’m a regular at two networking groups only because I wanted to start meeting new people (the ubiquitous term for anyone in his or her 20s).

Perhaps one day I’ll explain how to better network or expand my list.  If nothing else, you should network to meet more people in your industry to have your ass covered in case if you’re one day looking on the outside in.  I like to network because I have goals and ambitious that I can’t facilitate without people.  You win with people.

(The feature photo is from my days as a photographer at The Lantern.  I was the guy in jeans at a meeting of Ohio State luminaries…)