Looking Back at my FiveFingers

Yes, I owned a pair of FiveFingers.  Yes, they caused me the foot problems you’ve undoubtedly seen on the news (you’ve heard about it, but you may not have been paying attention because you have no idea what FiveFingers are 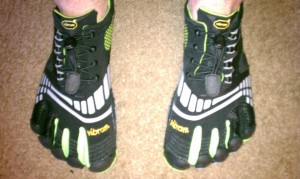 This is me, just after I got my first pair of Vibram FiveFingers. I can’t legally use any pictures of me actually running in them….

or why one run in such a thing), but running in then paid dividends in how I run.  Looking back at my FiveFingers, it was annoying the injuries I sustained, but as with everything in life, I don’t know where I’d be without them.

My Intro to FiveFingers

My friends, who’s working on a MD/PhD, first introduced me to the concept many moons ago.  Trying to keep an open mind, I watched the video(s) he marketed to me.  It made sense, I mean who wouldn’t believe a Hahvahd professor?, but I still felt a little dubious about buying them.  Eventually I gave in a purchase a pair.  (It can be a pain in the ass trying to find them because you need to locate a specialty running store that actually carries Vibram FiveFingers).

The first thing is they take a while to put on because they’re rubber gloves for your feet.  (Really, to me at least, the only difference between FiveFingers and truly running barefoot is with FiveFingers you have protection on your feet in case you step on something that would shred the hell out of your feet — FiveFingers offer no cushioning or support, they’re not supposed to.)  And they get attention — lots of it!  But more on that later.

As you could probably have guessed, you have to transition into them.  Going from shod-style running of landing on your heels to barefoot, frontfoot landing isn’t something done completely in one day.  Or lifetime in my case.  The muscles in your foot are actually used, since more shoe offer so much cushioning that you don’t develop much of any strength in your feet.  You also vastly gain strength in your calves and shins.

Marathon runners cannot start to run ten miles in them or else they could severely hurt themselves from my aforementioned reasons.  You start gradually by running a few blocks, minutes, or a run-walk of both.  Vibram even mentions just walking in them to get your body used to it.  In addition, they offer a guide to get you started off, with some light strength training exercises.

My half marathon was complete in them, however.  I recovered enough after sustaining my injury that I could run the half marathon, and boy was it harder to run (my marathon was actually “easier” in the fact that I was in much better shape for it, it was just on a bad day more or less; the half marathon was harder because it was actually a good run at a very, very long distance for the shape of fitness I was in).  My feet “hurt” but I wasn’t stopping during my Super Bowl, as I didn’t care if I had to sit out a while afterward.  It turned out that the pain was just pain from running 13.1 miles and not from an injury

I eventually 86ed them for good because of never not having long term luck with my feet.  Which is what is costing them almost $4MM in a court settlement from false advertising some made-up scientific studies.  Yadda yadda.  You can read up here or here.  I never thought about filing a claim because I knew that I could find myself injured, and did, but I couldn’t intellectually justify it.  After all, I learned how to run more efficiently that I would not have gain from an absence of FiveFingers in my life.  Plus, I wouldn’t have gotten that much money.  Especially since it looks like they’re splitting the settlement amongst so many people.

Back to me body.  I never actually went to see a doctor, but I’m pretty sure I sustained a stress fracture in my foot (I spoke more about it here).  Like most running injuries, it’s a repetition injury you sustain while running that when you’re running you think “it’s not too bad, I’ll be okay.”  But then it gets worse and worse until you can’t run anymore for that day.  Or maybe a few months.  It felt like a shooting pain.  And was swollen, I can’t forget to mention that (which I suppose on second thought, I probably should have seen a doc or something).  Last spring on a couple of runs I started to feel the same sensation again, so I went back over to the dark side and bought a pair of New Balance Fresh Foams.

I mentioned my calves and shins.  They never sustained an injury.  Since I ran with a completely new technique (in addition to less-than-adequate running form), but would often be more soar.  And since I’m one that if I can run faster I will, even if the run of the day doesn’t call for it, I end up prolonging recovery times.

Not that we got all that negativity out of the way, let’s talk about the good stuff!  Inherently, you HAVE to learn to run more efficiently with FiveFingers.  You have to land as lightly as possible, because you don’t have state-of-the-art cushioning to protect your joints on you 170 steps you land per minute (I know how many steps per minute I take, thanks to my Garmin 620; I bet you thought I pulled a random number out of my ass, ha).  You naturally learn the best, most efficient way possible to land and run.  This makes you run faster on long runs because you don’t waste energy on bad form.  If there’s one thing that FiveFingers did to help me it was to teach me how to run with better form, lighter on my knees.

FiveFingers are also very light.  Like <6oz. light.  My previous shoes, the ASICS Kayano, weighed twice that.  So, I also instantly became faster because of less drag (used non-technically).  Another nice byproduct is that I can buy the lightest shoes, because I don’t need heavy cushioning.  Like, the pairs elite marathoners wear for their, uh, marathons.  I don’t see a need to buy heavier training shoes because I’d rather always wear the same shoes and those training shoes actually cost more.  And I’m sorry this paragraph is written very randomly, even for me.

The running cult book, Born to Run, heavily focused on the lure of barefoot running.  The author, Christopher McDougall went to great lengths telling the story of contemporary tribes who still run barefoot, as well as the evolutionary reasons we were born to run.  You can read the book yourself to find out more information, which I highly recommend.  It’s a great story, as well as very informative (just don’t listen to those naysayers until after you’ve read the book — it’s not a hard read).  I can’t recall if the book features FiveFingers (I knew there are makeshift sandals, but barefoot running and FiveFingers are synonymous), but read it anyhow to complete your FiveFingers education.  And then give me your 500-word report sent here. Ha.

The ATTENTION they get!

The last point I want to make it the tremendous amount of attention they got.  I bought a second pair (the first was only for running as they get smelly as I habitually sweat in them) to wear casually.  I never did not have people talking about them.  They ranged from the most disgusted look to “dude, where did you get them?!”  I’d have people come up to me eating at restaurants asking me how they feel (truthfully I never really thought about it, I just kind of wore them as they are pretty comfortable, light, and grip very well to the ground).

I wore them around downtown Columbus, as in downtown-downtown, not just the Arena District or Short North, while on a D800 personal photo shoot one day and had one guy, who might have been homeless, completely stop his train of thought whilst sitting on a bench to congratulate the amazement that was my pair of FiveFingers.  On election day I had a guy walking out when I was walking in (I think he was handing out who the Democrats were for my precinct so we could all vote for the letter next to the name) stop and ask me about them.  Come to think of it, 90% of people were men who’d stop me.  Read into that as you wish.

I hope this gave you a nice insight on owning and running in FiveFingers.  I still have my two pairs.  I’ll probably never wear the running pair again and I do wear the casual pair from time-to-time.  Although it’s usually best them it’s not during the winter…