Ironman 70.3 OH-IO Registration: I crossed over to the dark side 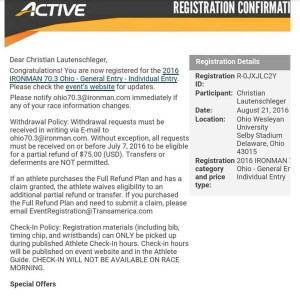 Whelp,  today I crossed over to the dark side from running: I registered for my first triathlon.  And in true I-don’t-fuck-around fashion, I signed up for a Half Ironman (you know, the 70.3 races you see on mid-level luxury cars at high-end shopping malls?).  1.2 miles of swimming, 56 miles of riding, and 13.1 of running.  At least I know how to run, sort of.

I’ve tinkered the idea of racing an Ironman for a few months and when a friend told me there’s a HIM in Ohio — within driving distance of my condo, so I can get a good night’s sleep here! – I couldn’t not get all excited, giddy, and piss-my-pants excited.  Basically, 2015 will be the year of “going long” for me having already signed up for 50K and 50M ultra marathons.  I mean, the half marathon during the HIM is literally a quarter of the distance of my February ultra marathon.  At that point in the HIM I’m sure it’s going to be mental and already having knocked out a 50M (I believe it’s officially 52.5M because of 10.5M loops).  Whomever says endurance athletes aren’t tough are fucking full of shit.  It doesn’t hurt any less to go slower, and in fact it’s worse because you have to live with it after the race.  Pain is temporary, and pride lasts forever.  A Marine would say.

Swimming, yeah, I’m thinking that that’s a late-spring activity.  I bought a bike Sunday!  I’ve wanted one for a little while, but I didn’t know I’d be as excited as I am now with her.  I named her Paula.  After the marathoner because I don’t know any female cyclists.  My ass was definitely sore from riding for the first time in years and years.  I bought actually bicycle shorts and they’re way more comfortable than my cargo shorts.  You’re not going to not take Paula out for a ride after bringing her home. 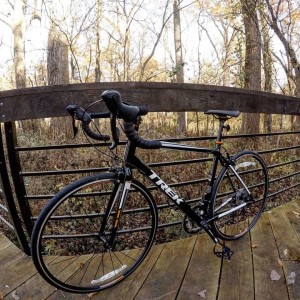 Things like this keep me every excited and enthusiastic.  I literally look forward going to bed, because that means I can go running, and now swimming and cycling when I wake up.  I suppose you have it made when you actually look forward to waking up.

No, I don’t want to get into the bike arm’s race.  Nearly every source states the cyclist is more important than the $10,000 carbon fiber bike.  I hope their right because that shit’s expensive.

Oh, and I’m looking forward to sporting an ultramarathoner’s beard to HIMOH-IO.