Well, this last week was kind of a watershed week for me — I sold/closed by duplex, it was the last week of running until my marathon taper, I registered for a shit ton of long races within half an hour, and I bought lots of bomb-ass photo toys.  Let’s have a little recap of all of them, shall we?

I put my duplex on the market late during the spring, and I finally sold the bitch late Friday afternoon (who knew businesses still conducted work at 4PM on TGIF?!).  It was the quickest close I’ve had at only 30 minutes sitting signing my name off on slightly few documents than when I bought properties.  I honestly can count only one hand the number of people I know about my age who’ve been at a closing, let alone three during a year and a half.  To recap, I bought an investment duplex, I bought a primary home condo, and now I sold the investment duplex.

I sold the duplex because I wanted to change my direction from investing in something, to investing in myself, at the end of the day.  One of the thing thirst things I learned was that real estate takes more time and money than what you think — neither of which I found to be ideal.  I learned a great deal in the year-and-a-half-ish I spent in the industry and am waaay ahead of the game when I re-enter.  So, instead my assets being tied up in one small property I cashed out to do other things.

And I made it to the bank before the close of business.  Boo-ya.

If you’re a marathoner, with the exception of Dean Karnazes, you know this means the race will be soon!  Tapering means you’re running fewer miles each week — the “peak week” usually being three weeks until the marathon – to rest your muscles while maintaining fitness.  In my case, I ran 82 miles this week, but will run 59, 46, and about 20 during the preceding weeks.  I won’t lose fitness during, and my body will actually gain strength from rest.  Or at least that’s the plan as I don’t know what I did last year qualified for anything.

Three weeks from now I will run the Columbus Marathon.  The weeks after my Emerald City Half Marathon have been 70, 68, 78, 68, and 82 (I ran the 70 during the six days following my half; hahaha, I let out my inner Bill Rodgers).  I feel much stronger now than I was during my half, and I ran that mother in 1:32.36; I would probably rip a sub-1:30 if I ran it again this weekend.

Marathon pacing is tricky because it’s not forgiving.  Go out too fast and you’re fucked for the next three hours.  Based on some pace calculators using my half time and weekly mileage I ought to run somewheres between a 3:13 and 3:15 marathon.  I’ve only run one and racing 26.2 is definitely an art, so we’ll see.  I’m usually a pretty hefty negative split runner, so going out at a jog is a must.  Eight-minute mile, then slice the pace off by fifteen seconds. Speaking of races… 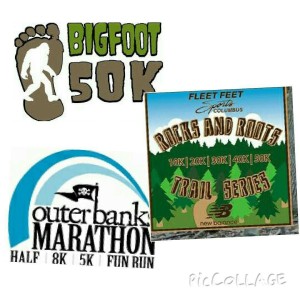 a collage of race I signed up for!

Yes, 31 miles and 50 miles (well, 52.5 as it’s 5x 10.5 mile loops).  I’ve been told that I need to race more, so I went the route that I’ll literally use races to train for more races.  I can’t tell you how excited I am for ultra races (ultra marathons are races longer than a marathon; so, technically, 26.3 miles constitutes an ultra marathon, but only intellectually dishonest motherfuckers would call that an ultra).

I had no real rhyme or reason other than they look like a hell of a lot of run.  A different breed of runners these ultra guys are I hear.  I figure this I like trails and running, who not combine them?  For what it’s worth, I’ll be a Marathon Maniac after it’s all said and done.

My mom, sister, and I will have each of our own first runcations to the OBX in November.  I noticed that the OBX Marathon will trade me a t-shirt and medal for $10 if I do both the 5K and 42.2K in addition to them individually.  We’ll call the 5K an “advanced shakeout run”.  Otherwise, I’d have three 42.2Ks and three 5Ks and that just doesn’t sound right.

And by purchased, I mean bought online and only a GPS thingy has made its way to my condo via Sunday delivery (related: the SD card for my GoPro was “lost” and is being redelivered, so I may or may not have to buy a card in store to use my GoPro.  Go figure.).

In an effort for Operation Make Passion Into Profession, I bought a Nikon D800 (yes, it’s used; and, yes, I sold one two years ago; hey, I needed the money at the time…), two Tammy 2.8 zoom lenses, and a GoPro Hero4 Black, because who doesn’t want to shoot in 1080p120?!

Without giving you every spoiler, I’m going to combine running and photography in ways to inspire and make you want to hit the trails.  I hear from people back home from time-to-time inquiring about my photography.  Maybe that’s a sign or something.

Philosophically I’m thinking about the $100 Startup.  If you haven’t read that book, or know of its ideas, then I recommend you picking it up.  It may change your life.  Essentially, for me, it takes the ideas behind “flow” and monetizes them.